From Tiruchy buses ply to Vayalur. Tiruchy is a commercial centre and well linked by road and rail to all parts of Tamil Nadu. Tiruchy also has a domestic airport. One can also fly to Madras Airport and take bus, rail or air route to Tiruchy.

Amenities. The Devasthānam has provided a resthouse with eight rooms. Tiruchy being a commercial centre has a variety of private boarding and lodging houses and restaurants.

Sarpa Nadi river originates from Uyyakkondan Hill. The pathway is adjacent to the river. The temple is surrounded by lush green fields called vayal in Tamil and hence the name Vayalur. As the name implies, the temple is on the plains surrounded by fields.

The temple is surrounded on all four sides by lush green fields. We also find rivulets crisscrossing the green fields. Stretches of coconut, palms add beauty to the paddy fields. Lord Siva enShrined in this temple is called Agnīshwarar. In front of the temple we find a beautiful pond and this is called Sakti Tīrtham. This is believed to have been created by the Sūlāyudham of Lord Muruga.

Near the pond we find the Teradiyan Shrine. As we enter through the main doorway we find the sthala vriksham – Vanni Maram and a well in the first prakara.

After worshipping the sthala vriksham we cross another gateway to enter the second prakara. The New Gopuram is found on this gateway. The Agnīswarar sannidhi is located in this prakara.

The outer prakara is 320 feet in length facing east-west direction and 87 feet in breadth in the north-south direction.

Śrī Ādināthar Swāmi Shrine is located at the entrance of the Temple is a swayambu lingam. He is called Agnīshwarar as He was worshipped by the fire god Agni; “Mahā Devan” because He is the Lord of all devas; Vidangar and Marapillināthar as He remembers devotees and blesses them towards salvation. This place also gets the name Agnīshwaram from the name of Lord Agnīshwarar.

In between the Shrines of Śrī Arunagirināthar and Śrī Subramanya Swāmi we find the Shrine of Śrī Poiya Ganapati. Śrī Poiya Ganapati is believed to emancipate mankind from the falsehood of life centered on the senses and help in Self-realization. The Lord holds the pomegranate fruits which symbolises the universe or in other word fullness.

Behind the Shrine of Śrī ādināthar Swāmi we find the main Shrine of Lord Subramanya Swāmi with His two Divine consorts Śrī Valli and Śrī Teyvanai seated on the peacock.

Just in front of the Temple we find the temple tank called “Sakti Tīrtham” which is believed to have been created with the Lord’s vel. This is also called Kumāra Tīrtham and Agni Tīrtham.

The Sthala Vriksham in this temple is Vanni.

In Vayalur Lord Muruga is single faced with four hands, Śrī Valli and Śrī Teyvanai flanking Him on either side. He is in a standing posture facing east with the peacock behind Him. According to mythology, Devendran himself takes the form of the peacock vehicle before Sūlrasamhālram.

Another noteworthy feature here is that the peacock is turned towards Śrī Teyvanai on the left of the Lord. The Lord, unlike in other Shrines, creates the water spring called “Sakti Tadagam” with His Vel and in a worshipping posture along with His Divine consorts Śrī Valli and Teyvanai.

The utsava mūrti or processional deity is a metal icon and known by the name Śrī Muttukumāra Swāmi. He is seated on the peacock.

Historically the Subramanyar temple at Kumaravayalur dates back to the period of the Cholas, as testified by the inscriptions seen here. The Chola kings who had Uraiyur as the capital in the 9th century built this temple. Later Śrī Kripananda Variyar contributed immensely towards the further development of this temple.

Kamika Agamam is followed for the daily ritual. Daily puja is conducted six times a day:

Devasthānam has also made special provisions for the devotees to conduct Abishekam, Shanmuga Archanai, Tirukalyanam and gold kavacham on the day of their choice with a nominal advance payments.

Researchers who have studied the inscriptions are of opinion that this temple was built during the reign of the first Ādittha Cholan. Nearly 20 inscriptions found on the walls of the garbhagraha of Śrī Ādinathar Shrine have been listed (1957; 138 -157). These inscriptions belong to the period of Chola kings, Paranthagan I, Rajarajan I, Rajendran I, Kulotungan I and Rajakesari I.

Monthly we find details of gifts of land and gold given by the general public and women towards burning the temple lamp. A lady by the name Sentankari took the goddess of the temple to be her daughter and spent all her riches in celebrating the marriage of the goddess with the Lord. According to the inscriptions this place was also called Uraiyur Kūtrattu Vayalur and ‘Tenkarai Brahmadeyam Nandivarma Mangalam‘. 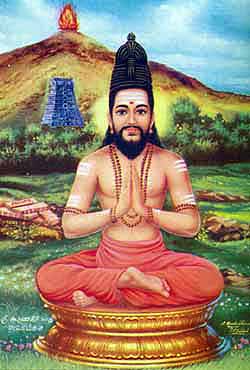